Drag-and-drop self-build website services are cheap and convenient but can an analogue ever be as creative as an artist?

Spoiler alert! No, they can’t. Computers don’t think like humans because they think in binary mathematics. Humans think in some far less constrained, more fluid way which we do not understand. But we know this; a five-year-old can learn to catch a ball and develop a reliable skill for it without performing a single trigonometric equation, let alone any differential calculus. Ask a robot to catch a ball but using no mathematics and you’ll be staring at the blue screen of WTF? for a long time… 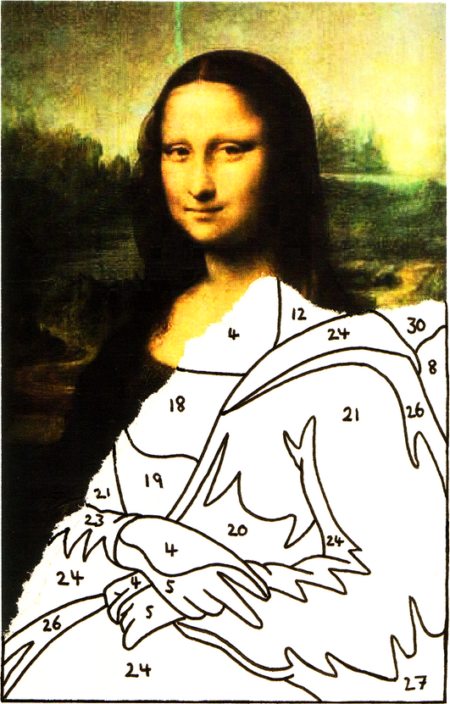 Painting by numbers is the analogue of drag-n-drop

Self-assembly websites providers like Wix, Weebly, Squarespace, Shopify et al make it easy for someone with no technical knowledge to populate a simple framework. In bespoke-built websites, developers argue about whether to use themes on WordPress or Drupal, or a completely custom frame. While the different platforms my facilitate creativity, none of them supplies it.

The truth is, developers are not designers and creativity is not a function of the canvas, it is what the artist brings to it.

The artist brings elements created specifically for the project and are, thus, truly unique. Logos, branding, all aspects of design need to be distinctive to set the product apart from its rivals.

Clues are in the design

The design of this panel is inspired by the days of print production before Apple Macs brought Desktop Publishing to the party.

The masking tape securing a piece of paper to a pasteboard, the scalpel, propelling pencil and the printer’s marks are all visual cues familiar to anyone who knows old school print production. These are semiotics are visual clues to the viewer, we use their own knowledge to connect to the content of this panel. It is a nod and a wink to those in the know.

In this panel, the only user content is the text. The visually rich look is a consequence of the typography and the page furniture artwork.

In the panel above, the artwork you see is built into the design. The website user does not need to upload any of the graphics or place any code, the furniture is placed around the user’s content automatically.

How to have
Fun with Fonts
in your website

Note too, how the use of fonts helps to set the scene. The manual typewriter body copy and the Dymo embossed labelling-style heading are both call-backs to when making pages was a hands-on practice.

We can use clichés to get the ball rolling. For example, if we are choosing a font for a website about Wedding Services and another for a Heavy Metal band, there are established tropes we can draw on. The same two fonts, however, would work equally well for websites about writing long-form poetry and gothic fairytales so from here, we tailor the design further.

Automated online tools, at best, apply only the broadest strokes in the most common formats. The analogues which perform these functions work literally because that is the way computing works.

But a designer thinks laterally and figuratively. When designing a website for ‘Cloud Cycles’ online bicycle rental service, putting a cloud shape behind a bicycle silhouette can only be, at best, a starting point.

We need a hero

Hero – or header – images on articles should not always be exactly a photo of the subject under discussion. The image can illustrate the content in such a way that the viewer gains an insight into the article’s content but not necessarily literally. This image is crucial in communicating, at a glance, an overview of the content of your publication. It is in this moment that the visitor decides whether or not to look further into your content. 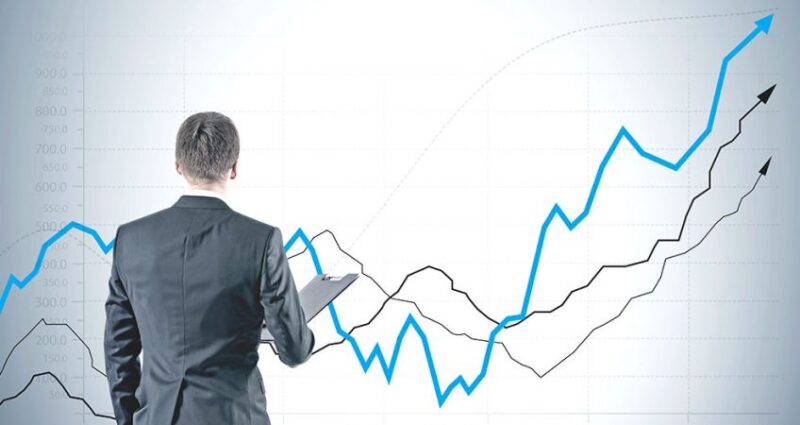 This photo is a genuine landing page hero image on a business site. What does it say to you? To us, it says ‘kill me now’…

The clever use of figurative illustration can make a connection with the viewer by, essentially, flattering their intelligence. The sense of ‘I see what you did there’ in your visitor makes a connection that a purely documentary image won’t.

The following example is typical of the sort of thinking that needs to go into picture research.

The brief:  We need an hero image for an article about infrastructure resilience in cities in preparedness for catastrophic incidents. The story is about how to maintain existing infrastructure – transport links, communication channels, utilities – and deploying emergency services as needed in the face of some major incident – terror attack, natural disaster, system failure (eg: power outage). It is about coping with disasters on the scale of a large, urban conurbation.

Avoid specificity: An aerial view of a city in a photo will be of a particular city but the article applies to all cities. So how about an illustration? We dodge the specific city reference but the image will show roads, railways, maybe power lines too but we can’t hope to illustrate, literally, every piece of infrastructure that falls within the remit of the story.

The focus: The story is not about the disasters, it is about infrastructure coping with them, so we don’t want scenes of damage caused by specific types of incident. We want an image that represents an intelligent, flexible infrastructure which has good communication and can survive or adapt in adverse conditions.

What can we think of as a visual metaphor for such a network?

The image of bees on a honeycomb is illustrating a concept and the viewer recognises this within the context of the article.

Most websites have a single purpose. They are selling a particular product or service or addressing a particular subject and if this is illustrated literally, the images can be very samey. Hero images are more powerful if they have creative thinking in them.

Web apps execute simple commands, they do not think creatively

But if you put ‘semiotics’ or ‘metaphor’ into a Google image search you’ll get a dog’s breakfast of annotated diagrams with written definitions. Both concepts rely on artistic interpretation and utterly defeat literal translation in the binary code that computers operate in.

A unique design employs well-established tropes, even a dash or two of cliché, but also a big slice of inspired creativity. For now, at least, you can’t get that from a web app. 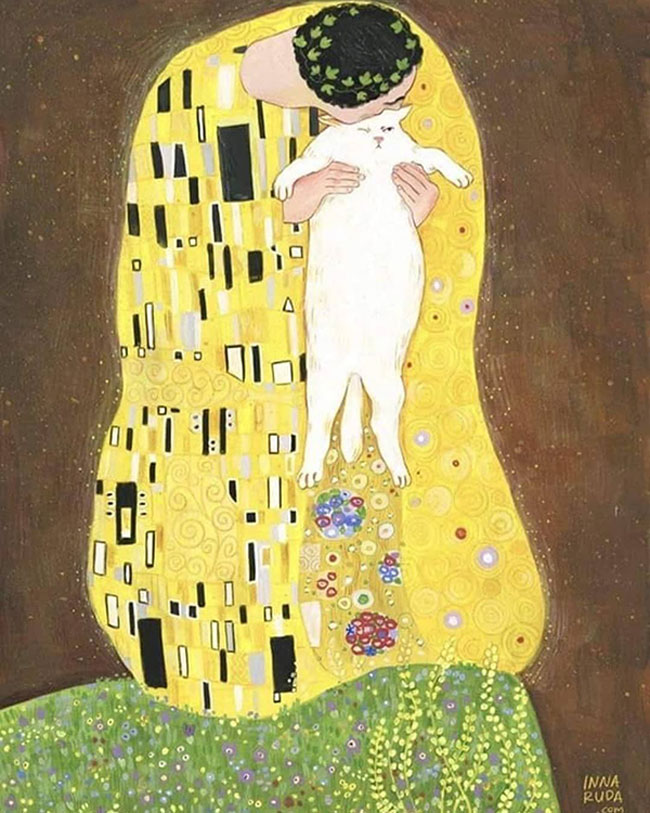 The Kiss after Gustav Klimt by Inna Ruda 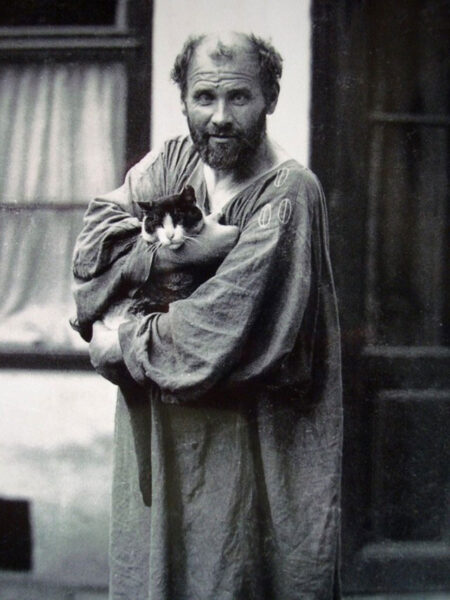 Gustav Klimt and a cat

Put the words ‘Gustav, Klimt and cat’ into Google and you get a photo of the celebrated artist holding a cat. Put the same three words into an artist’s imagination and you can get something far more interesting. Talented illustrator, Inna Ruda, came up with a take on Klimt’s celebrated work; ‘The Kiss’.

The first time we saw this illustration, we laughed. It is a mixture of the sublime and the ridiculous; it is a confabulation of highly regarded, classic art and social media’s most popular junk: cat pictures. It is a comment on how the modern world is enamoured with the instant ‘likes’ of the equally instant images posted to social media. Scrolling through endless memes, we are failing to see and appreciate true art.

We might be wrong. We might be misreading the artist’s intention here but that does not matter, the point is, the illustration provokes thought and examination in the way the photo of Klimt holding a cat doesn’t.

What was the artist thinking? 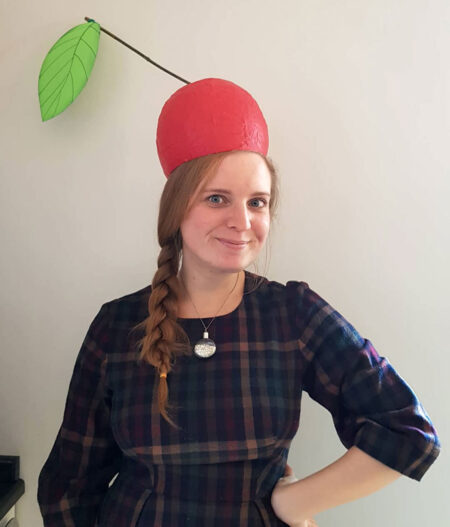 Artist Inna Ruda with a cherry on top

Not that, says Inna. I have a client, who produces home decor and dinner plates with funny images on them. I paint a lot of cats and dogs for this client, and one of the ideas was to make a set of plates with ‘popular cats’ on them, like Einstein cat,  Elvis cat or Frida cat.

It turns out, there are already dozens of Cat-Fridas and about four or five Cat-Van Gogh’s self-portraits.

I thought it was very funny and decided to have fun with it. For me, the ability to have fun in creative work is key to a good result. I drew a man kissing a grumpy cat as in ‘Kiss’ by Klimt.  I should say, I am a dog person and think that dogs are the cutest things on Earth. While cats, well, they are different. They are little furry beings dissatisfied with the behaviour of their humans. I find this to be very funny, so for me, a man kissing a dissatisfied cat – that is very true to life.

– many thanks to Inna for her contribution to this article and we agree, dogs are better.

Have a poke around

We use cookies to ensure that we give you the best experience on our website. If you continue to use this site we will assume that you are happy with it.YesNoPrivacy policy